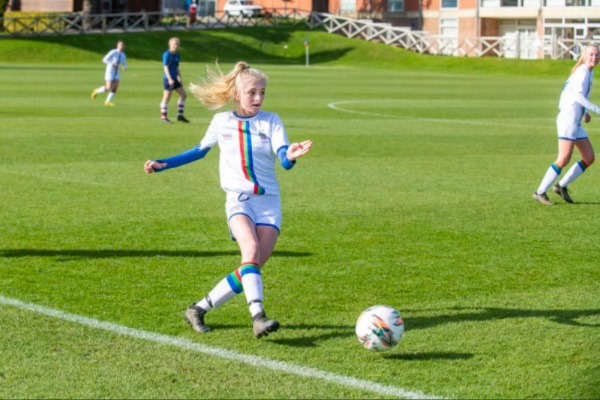 Are you motivated to join a girls’ football team? The England Women’s Football team winning the 2022 Euro championship marks a turning point for women’s football. As a female-founded and female-led company, we recognise the significance of this incredible and historic achievement.

The team has inspired thousands of girls around the UK, but this is just the beginning. The Lionesses (as the team are referred to) believe that every girl should be able to play football at school – and educational institutions around the UK are gradually starting to make this a reality.

Bede’s School is a co-educational Senior and Prep boarding school in East Sussex, England, offering a top quality education up to exam levels of GCSE, A Level and BTEC. Football is a popular sport at the school, with approximately one third of the student population regularly representing the school. The Girls Football programme runs year-round, with training sessions taking place once a week in the Autumn and Winter terms. In the Summer term, sessions take place twice a week with a former professional footballer.

Some current female students at Bede’s play for the nearby Brighton and Hove Ladies semi-professional team. Furthermore, the girls’ teams at Bede’s compete in the ISFA cup. They achieved ultimate success by winning the cup in 2017/18. Join the team at Bede’s School.

Claremont School is situated in East Sussex, England and is a co-educational Senior and Prep boarding school. The school offers GCSE, A Level and BTEC exams. Claremont believes that football should be accessible to everyone and their Football Academy coaches young footballers from around the globe. The school’s excellent sporting facilities include more than 50 acres of grass pitches and pupils participate in strength, conditioning and fitness sessions, alongside their football training. Football coaching never coincides with teaching, so students are able to train without having to miss lessons and fall behind in class.

Girls who participate in Claremont’s Girls Football Academy train for approximately 6-7 hours each week, and as the number of participants grows, these hours are likely to increase. The Director of Claremont’s Football Academy is a Premier League scout and has contacts with the England team and in other countries. This provides an excellent and exciting opportunity for pupils demonstrating talent and promise. Get your football boots on at Claremont School.

Millfield School is a co-educational Senior and Prep boarding school in Somerset, England. It is one of the UK’s largest boarding schools and offers pupils GCSE, A Level and BTEC qualifications. The school has a reputation for being one of the best sporting schools in the country – football is no exception! Young female footballers at Millfield have the chance to train 6 times a week – more than most female football clubs. Pupils on the Girls Football programme learn from an experienced full-time girls’ football coach, with both individual and team coaching sessions available.

Facilities include 11 full-sized pitches and 3 training areas, and students also have access to physiotherapists. Girls’ teams enter cup competitions and more than 100 girls in the Senior school play football. This is in stark contrast to the 6 girls who played football at Millfield in 2018. Millfield has made great progress for female football and the school sets an example for others to follow. Start your football career at Millfield School.

Oswestry School is a co-educational Senior and Prep boarding school in England. Situated in Shropshire,  it follows the GCSE and A Level curriculum. Oswestry is known for the quality of its sports teams – 22 of which are dedicated to football. In fact, more than 170 pupils, both boys and girls, play football at Oswestry School.

Furthermore, the school has partnered with the Football Association (FA), demonstrating its dedication to improving the access to and provision of girls’ football. With this partnership, Oswestry hopes to greatly increase female participation in the sport. Kick off your football training at Oswestry School.

You can find Repton School in Derbyshire, England. This is a co-educational Senior and Prep boarding school offering GCSEs and A Levels. Football is a “focus sport” at Repton during the Winter term, and is open to both boys and girls. Repton School has a highly experienced football coach for girls, who currently plays for Stoke City Women’s Football Club. Developing and increasing the provision of girls’ football at Repton remains one of the school’s top priorities. Learn from a female football professional at Repton School.

Contact us now if you are interested in starting your football career at a UK boarding school.

Spring term at the best British boarding schools in England, Scotland and Wales

What makes the UK multicultural?